The word ‘yeast’ comes from the Sanskrit word ‘yas’ which means ‘to seethe or boil’.

Yeast has played a very important role in human history. Without yeast, staples like bread, beer and wine would not exist. Man has used yeast even before the development of a written language without actually knowing about its existence or understanding its role. It is believed that yeast is probably man’s oldest industrial micro-organism. For centuries, yeast has been associated with bread making as a fermenting agent. The origin of bread, though obscure, dates back to the Stone Age. Flat breads were common in the late Stone Age, while raised bread originated around 4000 B.C.

Yeast has also helped in the production of alcohol for as long as recorded history. Traces of yeast were discovered in beer jars, and beer breads were used as offerings in the Theban tombs in 2000 B.C. Fermentation, originally a matter of chance contamination of airborne yeast, was promoted by using a piece of old dough. To this day, this is the method the most prestigious bakers choose. By 300 B.C., however, yeast-making became a specialized profession.

However, it was not until relatively recently (1841) that yeasts were recognized as the cause of fermentation. Louis Pasteur is credited with the discovery that yeast was responsible for beer fermentation in 1866. Fifteen years later, at the Carlsberg Laboratory in Copenhagen, Emil Hansen isolated and purified individual yeast strains, and brewer’s yeast started to be banked and stored. Many of the pure culture techniques Hansen developed are still in use today.

Yeast is a living, single-cell organism commonly found on plants and animals. On solid media (plates or slants), yeast barely becomes visible as a clump at one million cells. Yeast was long considered a mysterious organism as a single cell, at five microns in size, is not visible to the human eye.

Beer is made from just four simple ingredients: malt, hops, water, and yeast. While sometimes overlooked, yeast is one of the most important of these ingredients. When it transforms sweet, hopped wort into beer, it also is responsible for the flavor and aroma of the beer.

Yeast is now commonly available is packets and foil sachets in the supermarkets. However, there is nothing new in the function of a raising agent for imparting that special light texture to the bread we eat.

As it is readily available and easy to culture, baker’s yeast is also used in chemical, biological, and genetic research. For example, most of our knowledge of the cell division cycle has come from experiments with yeast.

Some Interesting Facts about Yeast

The optimum ale fermentation temperature has been found to be 20°C (68°F). This temperature strikes the best balance between yeast growth and ester levels for most ale strains.

The Art and Science of making Yeast: Environmental Control Systems for Yeast Drying and Manufacturing

Yeast making is truly an art and science. It involves growing the organism in suitable media. The most popular yeast for winemaking, baking and brewing since ancient times is Saccharomyces cerevisiae, the microorganism which is prepared in the laboratory as the seed yeast. The crop is harvested when a sufficient crop of cells appears.

This is then transferred into a clear mineral salt-sugar solution and used as the medium where fermentation occurs. The temperature is kept constant for rapid growth to take place. The yeast cells are then separated from the fluid in which they have grown by a filtration process. The yeast cells are mixed with starch cells and pressed into large cakes. Fresh yeast can survive only for a week at controlled temperature of 4°C (39.2°F). Hence, it needs to be stored in specially constructed cold stores. On the other hand, dry active yeast can be kept for three years without any loss of properties.

Dry yeast is fresh compressed yeast that has been pressed and dried until the moisture content is only about 8%, which makes the yeast dormant. The granules become active again only when mixed with a warm liquid. The advantage of dry yeast is it has a much longer shelf life than fresh yeast and does not need to be refrigerated.

Drying of yeast is an intricate process, requiring cold dry air to produce quality yeast without destroying the organism. Though elevated temperature ensures faster drying, it can spoil the product quality, as it destroys the organism, the most critical requirement for quality yeast making. 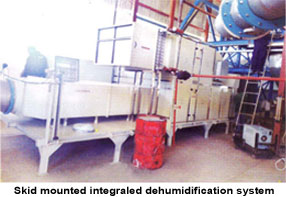 Desiccant dehumidifiers can maintain these stringent conditions in the fluidized bed dryers used in yeast manufacturing. In conjunction with air conditioning plants, very dry air at low temperatures can be supplied for yeast drying. Desiccant dehumidifiers offer the simplest and most cost effective way since they are capable of maintaining RH as low as 1 %, or even lower, at a constant level regardless of ambient conditions.

Drying of yeast is done using Fluidized Bed Dryers (FBDs). To ensure drying of yeast, inlet air to the FBD is supplied with conditioned air at low temperature of 6 to 10°C, at moisture content of 1.5 to 2 grams/ kg.

This is typically an open loop system with 100% fresh air preconditioned prior to inlet to the FBD. Fresh air is first pre-cooled with either DX or chilled water enthalpy coil to remove easy moisture. This cooled saturated air is then further dehumidified to about 1 gram/Kg by passing through a desiccant dehumidifier. As the desiccant dehumidification process works on the constant enthalpy line, dehumidified air has a corresponding rise in its temperature. 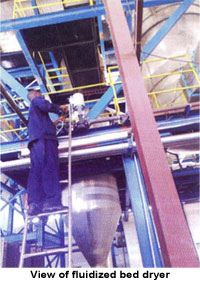 This is cooled to the desired temperature of 6 to 10°C by passing through a post cooling coil (either DX or chilled water based). This is a sensible cooling process as no moisture is removed. This cooled dry air is then pumped into the FBD through a high static blower to dry the wet yeast. Dried yeast is taken out from the bottom of the FBD, and humid air is exhausted to the atmosphere.

The desiccant rotor in the dehumidifier is continuously reactivated by passing hot ambient air in the reaction section.

It is important to dry yeast for long term storage abilities. The most cost effective process to achieve it is by drying yeast using extremely dry low temperature air having 1.5 gram/Kg absolute moisture content at 6 to 10°C. As these conditions are not practically possible to achieve by only mechanical cooling, desiccant based integrated systems are used by various yeast manufacturers.