Can Tesla’s entry into India power up its struggling electric vehicle market?

Consumer demand for electric cars has been cautious, while a lack of charging infrastructure and high costs have dragged on the EV sector

An EV car owner charges his vehicle in New Delhi. With just 933 public charging stations across the country, consumers are unsure if they can charge their vehicles for longer journeys. Bloomberg via Getty Images

India’s nascent electric vehicle (EV) market has long struggled to get off the ground, beset by a range of challenges including a lack of charging infrastructure and local production of expensive battery components.

However, the sector is expected to receive a much-needed boost from Tesla, the world’s most valuable car company, as it gears up to enter the country.

“The overall supply chain will also improve as Tesla’s suppliers would be keen on investing in the country for manufacturing electric vehicle components.”

BS Yediyurappa, chief minister of Karnataka, this month said Tesla will set up a manufacturing unit in the south Indian state.

Tesla is yet to make a formal announcement about the unit and there is no clarity on a timeline. However, it has been pressing ahead with its plans for Asia’s third-largest economy, which could be a significant new growth market for the brand as it targets the production of 20 million vehicles a year globally by 2030.

Chief executive Elon Musk in October said on Twitter that the car maker would make its entry into India in 2021 “for sure”. In January, the company incorporated Tesla Motors India and Energy Private Limited, setting up its registered office in the city of Bangalore, the capital of Karnataka and a hub for global technology companies.

Prime Minister Narendra Modi’s government has an ambitious target to promote EV use in the country in a bid to bring down soaring pollution levels and reduce its dependence on costly imported fossil fuels.

India is aiming for 30 per cent of private cars and 70 per cent of commercial cars to be electric by 2030. A report released in December by the CEEW Centre for Energy Finance (CEEW-CEF) projected that India’s electric vehicle market would generate $206 billion in revenue from sales to consumers if the country achieves its target. 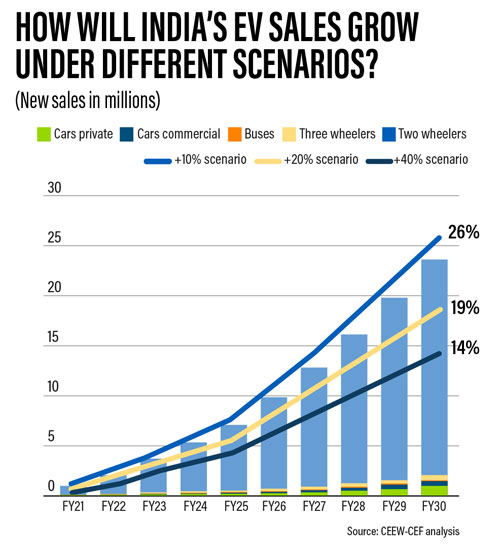 There is an investment opportunity of $177bn for vehicle production in India, $2.9bn for charging infrastructure and $12.3bn for battery manufacturing, according to CEEW-CEF.

But so far, India’s push in EVs has been slow compared to that of China, where Tesla launched its first factory outside of the US in 2019. Currently, most of the EVs sold in India are scooters, with just 3,400 domestic electric cars sold last year, down from 3,600 in 2019, according to the Society of Manufacturers of Electric Vehicles.

Demand for EVs “has been extremely cautious as consumers do not know what to expect with this form of mobility”, says Pallav Choudhary, director and founder of Hyperion Chargers, a charging solutions provider for electric mobility in India.

“There are still a lot of unknowns and variables relating to the same [and customers question] will the range of cars be sufficient enough to sustain their daily usage as well as interstate travel.”

One of the major challenges for India’s EV market is insufficient charging stations. According to the Central Electricity Authority, there are just 933 public charging stations across the whole of India as of June 2020, leaving car owners unsure if they can charge their vehicles for longer journeys.

“Electric car companies have been reluctant to manufacture electric cars in India as they fear a lack of charging infrastructure in the country will lead to lower sales,” Mr Choudhary says.

Another factor deterring customers is the cost. The batteries, which are imported, are the major contributor to the high prices of EVs.

“Batteries make up about 40 per cent of the value of an EV,” says Deepak Pahwa, the managing director for Bry-Air (Asia), which provides technology that can be used in manufacturing batteries.

The raw materials, production and technology required makes manufacturing these batteries an expensive process, he adds.

“An EV’s battery pack comprises lithium-ion cells, it uses metals such as lithium salt, cobalt, nickel and manganese,” he says. “These metals are very difficult to extract and require large-scale investment to set up mining facilities.”

While China produces most of the lithium batteries for EVs, Mr. Pahwa says the Indian government and companies are investing in manufacturing facilities to support localised production of components. There are also plans to develop factories for lithium-ion batteries in the country, as well as other parts and technology needed for EVs.

“The government and start-ups are all marching towards the goal of electrifying vehicles,” says Srinivas Chitturi, co-founder and chief executive of MTAP Technologies, a Bangalore-based software company, which provides solutions to the transport sector. “The manufacturing and after-sales ecosystems are important for the sector to flourish. A lot of progress has to be made on the manufacturing side.”

Despite limited demand, Mahindra & Mahindra has been manufacturing EVs for several years, while Tata Motors is also increasingly focusing on the segment. And others are following suit.

“With indigenous companies like Tata Motors, Mahindra and Maruti working actively towards releasing their electric vehicle versions of their existing cars, as well as foreign companies like Morris Garages also manufacturing their electric vehicles in the country, a particularly good platform has been set up for car makers both indigenous as well as foreign to start their manufacturing in the country,” Mr Choudhary says.

With the entry of Tesla, there could be a significant shift in gear in the industry as it “will certainly boost the acceptance as well as the appeal of EVs in the Indian market due to its brand identity”, he adds. 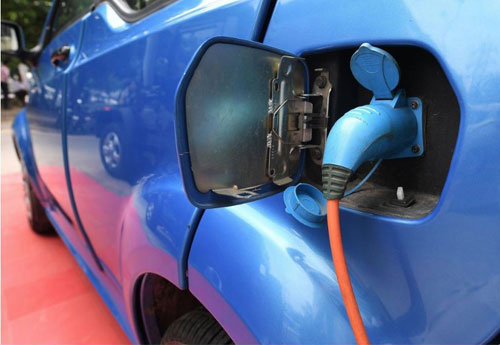 Mahindra’s electric car, the “e2o Plus” model, is plugged in for charging at a showroom in New Delhi. AFP

Industry insiders say Tesla is also likely to invest in charging infrastructure in the country, which would provide another boost to the sector.

Questions have been raised, however, over how many consumers will be willing to fork out for Tesla’s cars in a highly price sensitive market. Reuters reports that Tesla plans to import and sell the Model 3 in India for about $65,000 to $75,000.

“The initial objective for Tesla seems to be to enter India and have a presence in the market,” Mr Sharma says. “Its Indian manufacturing unit could be an export hub for Tesla in future years.”

In the past, Mr Musk has flagged India’s high import taxes as a hurdle.

Mercedes-Benz in October launched India’s first luxury EV with a price tag of $136,000, and has sold 31 of these cars in the market so far, according to research firm JATO Dynamics.

Meanwhile, British car maker Jaguar Land Rover, which is owned by Tata Motors, also plans to sell one of its luxury EV models in India this year.

In China, a budget EV made by state-owned SAIC Motor in a joint venture with General Motors has been priced at $4,500 – and sold double the number of units last month compared with Tesla.

“Tesla will have to launch an affordable EV in India to achieve volumes and long-term success,” Aman Madhok, senior analyst at Counterpoint Technology Market Research, says. “A local manufacturing base will help here.”

The potential for growth in the market is enormous for brands that can persuade users to buy EVs.