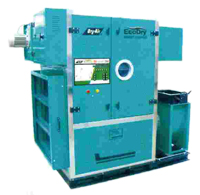 The new EcoDry dehumidifiers incorporate the BrySmart EMS (Energy Management System) technology, Unlike the present product technologies and control systems, BRYSMART EMS, is a microprocessor-based, cutting-edge dehumidification control system, based on inputs of several key parameters, processing these with in-built algorithm and modulating various devices/components in the system to optimize energy usage based on varying ambient conditions and internal sensible & latent loads. Existing Installations can also save energy up to 45% by retrofitting their existing installations with EcoDry Dehumidifier with BrySmart EMS. This will result in less energy consumption resulting in lower electricity bills.

Bry-Air Asia mainly owns the recent patent (pending) for this innovation. The technology has being jointly introduced in the market place along with its associates, Bry-Air, USA. This is the 9th patent to the credit of the Bry-Air group.